As the Internet of Things (IoT) landscape continues to grow, practically everyone and everything, it seems, is compiling data or at least generating statistics for any variable imaginable. And music is no exception. The music streaming service, Spotify, stores an array of features for each song in its library. They record characteristics such as acousticness, danceability, energy and more. With these variables in mind, I conducted some exploratory analysis along with a couple clustering methods on Kanye West’s Spotify discography. The following report utilizes Spotify’s Web API through Charlie Thompson’s spotifyr package which you can check out here.

The following code and plots make use of these packages:

First let’s import the audio features for Kanye West and take a quick look at the data.

After viewing the data, I noticed a few tracks (rows) are duplicated since some albums contain edited, clean, and/or live versions. Those rows will be removed in addition to some irrelevant columns. Also let’s be sure we don’t have any missing values.

The dataset we will be working with now has 125 rows and 13 columns with no missing observations!

“How suitable a track is for dancing based on a combination of musical elements including tempo, rhythm stability, beat strength, and overall regularity. A value of 0.0 is least danceable and 1.0 is most danceable.”

Before determining which album Spotify deems the most danceable, let’s take a look at how danceability is distributed on each album. 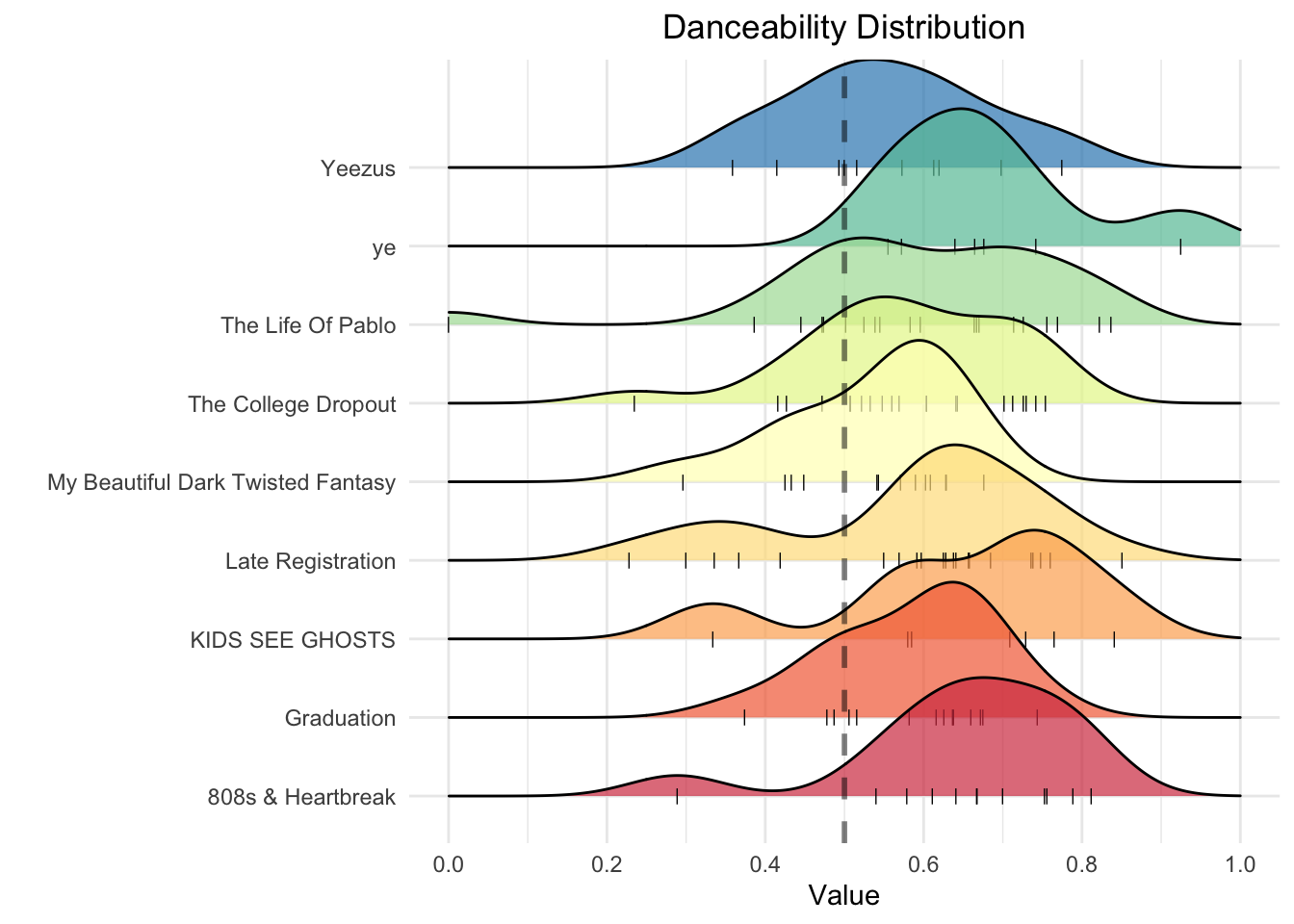 The dashed vertical line in the middle represents the midpoint on the danceability scale. Also, the smaller tick marks at the bottom of each shape represent one song on an album. Each album appears to be more danceable than not, but let’s weight each song by its duration to get a better picture of each album in its entirety. The following graph outlines the results.

Again, let’s look at the overall distribution for each album, but for valence this time. 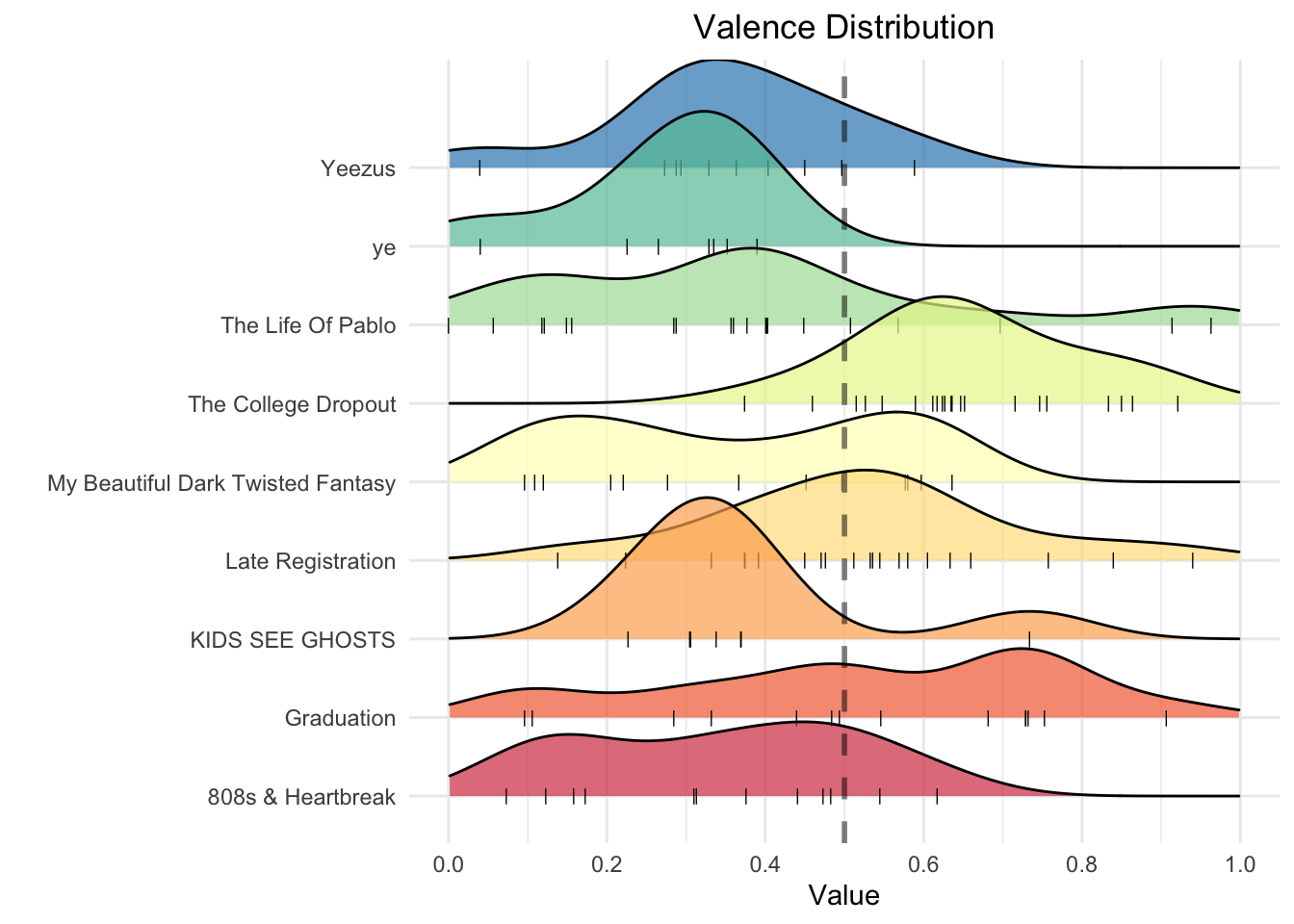 Perhaps a bit more polarizing than the danceability metric, most albums seem to have their fair share of both positive and negative sounding songs. Now weighting valence by song duration, let’s discover Kanye’s happiest (and saddest) album.

Interested in exploring the rest of the variables? Choose which characteristics to plot and select which albums to compare using the interactive graph below!

Now on to some clustering methods. Let’s determine which albums sound the most alike using hierarchical clustering. A tree with a height of 4 and complete linkage is shown below. 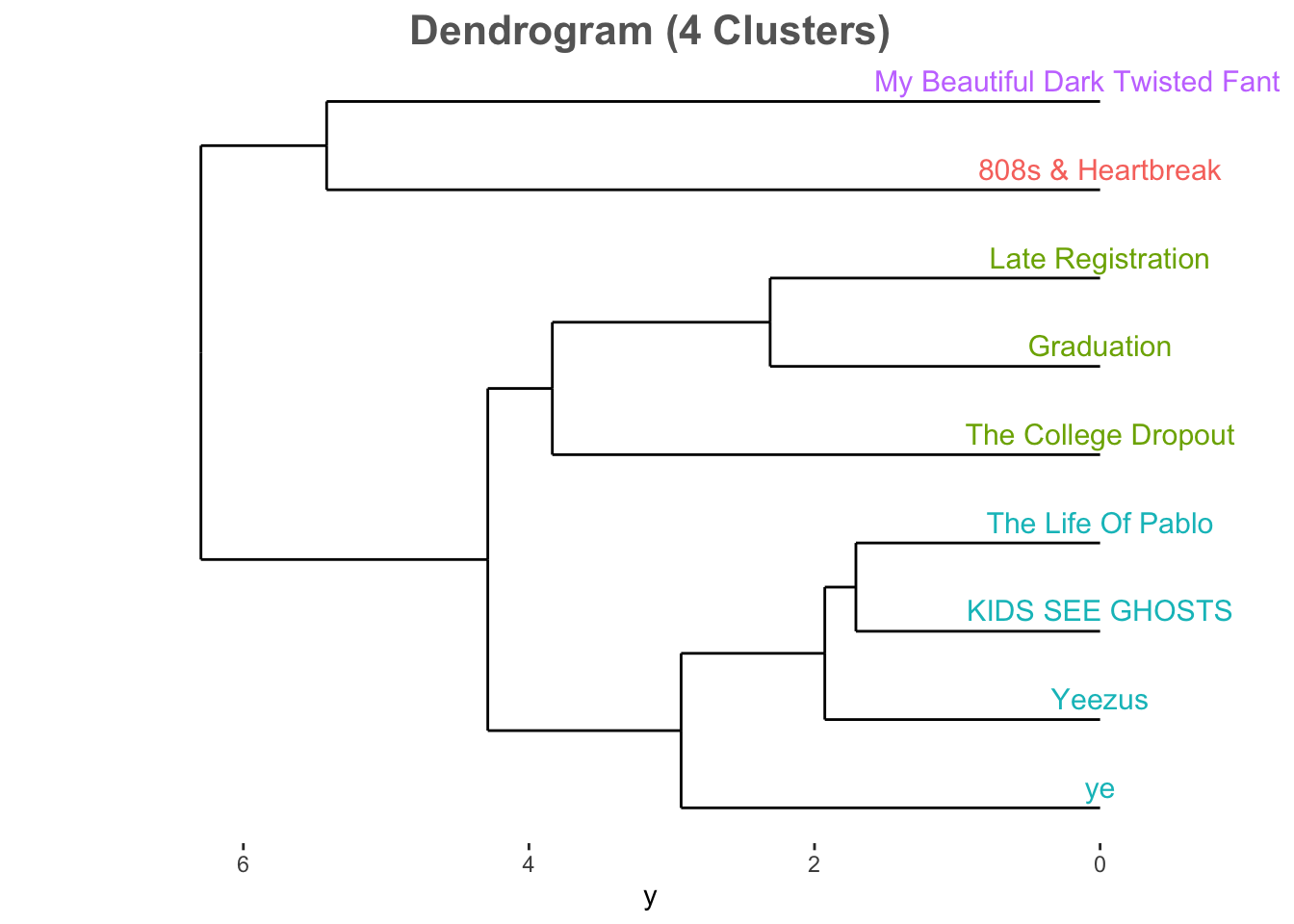 Kanye’s first three releases belong to one cluster while his last four belong to another. The middle releases, 808s & Heartbreak and Twisted Fantasy, are not only his most danceable records but his most unique sounding as well; they each populate their own cluster.

Now let’s use those variables and see if we can discover if his more popular songs score similarly for each variable. Using a PCA to reduce dimensionality and account for correlation we can try to reveal any patterns.

The most popular songs don’t appear to belong to any specific area or cluster on the graph, but it does look like Energy and Loudness are correlated. Try graphing them using the interactive plot above!

In Data We Trust